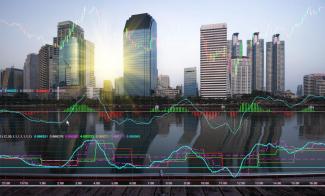 After a period of relative calm in the markets, the recent increase in volatility in the stock market has resulted in renewed anxiety for many investors.

From February 1–5, the US market (as measured by the Russell 3000 Index) fell almost 6%, resulting in many investors wondering what the future holds and if they should make changes to their portfolios.[1] While it may be difficult to remain calm during a substantial market decline, it is important to remember that volatility is a normal part of investing. Additionally, for long-term investors, reacting emotionally to volatile markets may be more detrimental to portfolio performance than the drawdown itself.

As you’ll see in the charts below, market pullbacks are more common than most investors realize.  A recent article in the Wall Street Journal points out that this is the fifth market correction (defined by +10% drop) during the current bull market which began in 2009.

The retreat in the Dow Jones Industrial Average marks the fifth time in the current bull market that U.S. stock indexes have suffered 10%-or-more declines. The others were in 2011, following the S&P Ratings Services downgrade of U.S. debt; in 2013, during the “taper tantrum” over Federal Reserve stimulus-reduction plans; in 2015, following the surprise devaluation of the Chinese yuan; and early 2016, in response to the spread of negative interest rates.

Here is a chart published by American Funds covering intra-year declines in the S&P500 from 1946 through 2013.  The table provided offers a great summary of the frequency of such events. See the DFA chart below for what I find to be a clearer picture of intra-year market movements. 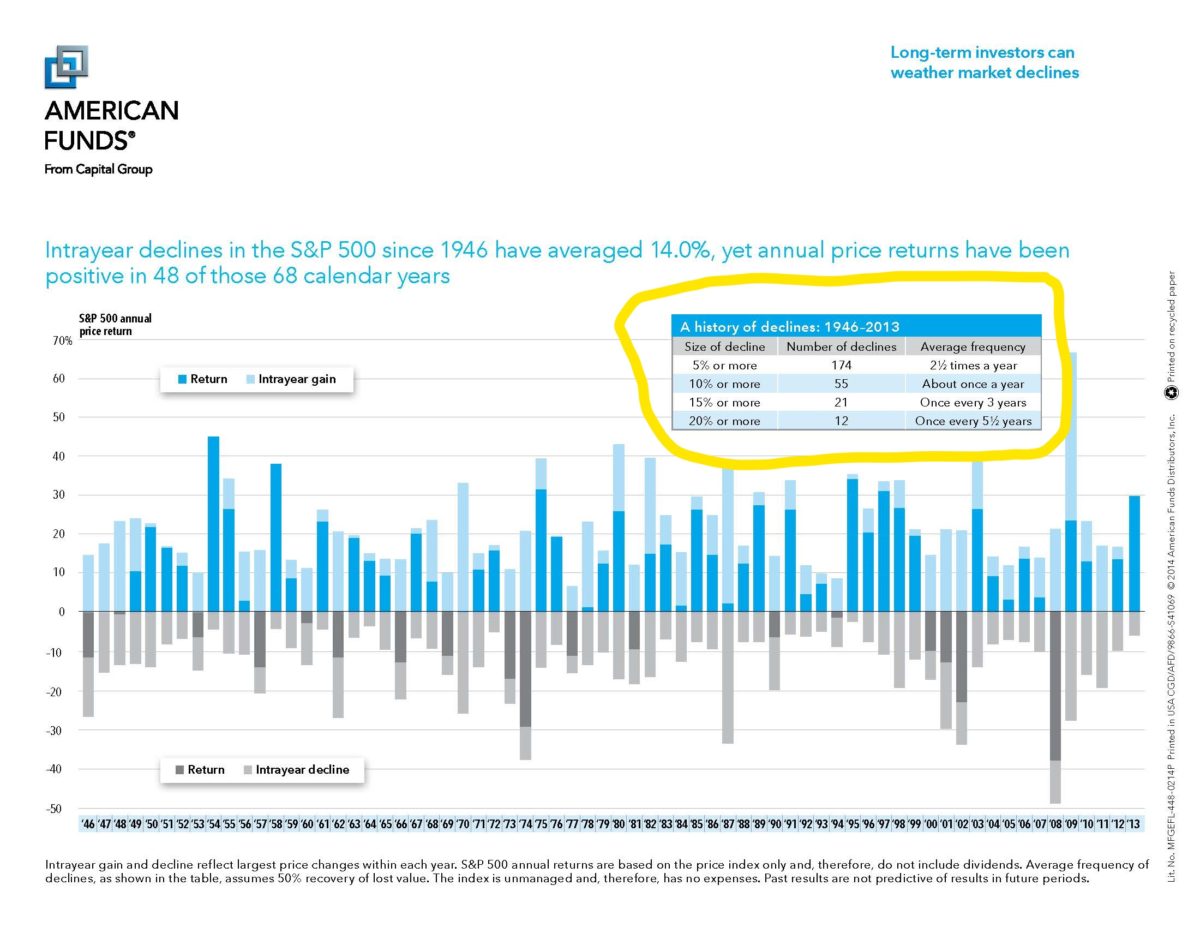 Dimensional Fund Advisors (DFA) produced the following chart which shows calendar year returns for the US stock market since 1979, as well as the largest intra-year declines that occurred during a given year. During this period, the average intra-year decline was about 14%. About half of the years observed had declines of more than 10%, and around a third had declines of more than 15%. Despite substantial intra-year drops, calendar year returns were positive in 32 years out of the 37 examined. This goes to show just how common market declines are and how difficult it is to say whether a large intra-year decline will result in negative returns over the entire year. 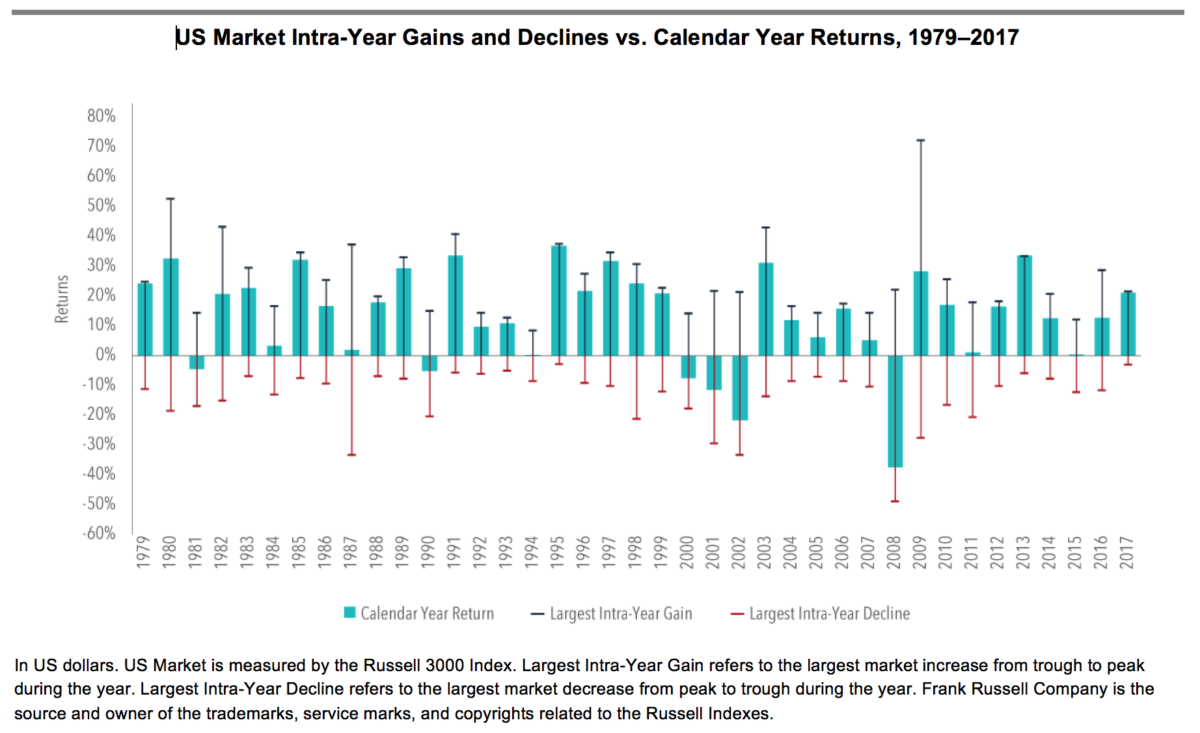 If one was to try and time the market in order to avoid the potential losses associated with periods of increased volatility, would this help or hinder long-term performance? If current market prices aggregate the information and expectations of market participants, stock mispricing cannot be systematically exploited through market timing. In other words, it is unlikely that investors can successfully time the market, and if they do manage it, it may be a result of luck rather than skill. Further complicating the prospect of market timing being additive to portfolio performance is the fact that a substantial proportion of the total return of stocks over long periods comes from just a handful of days. Since investors are unlikely to be able to identify in advance which days will have strong returns and which will not, the prudent course is likely to remain invested during periods of volatility rather than jump in and out of stocks. Otherwise, an investor runs the risk of being on the sidelines on days when returns happen to be strongly positive.

The chart below helps illustrate this point. It shows the annualized compound return of the S&P 500 Index going back to 1990 and illustrates the impact of missing out on just a few days of strong returns. The bars represent the hypothetical growth of $1,000 over the period and show what happened if you missed the best single day during the period and what happened if you missed a handful of the best single days. The data shows that being on the sidelines for only a few of the best single days in the market would have resulted in substantially lower returns than the total period had to offer. 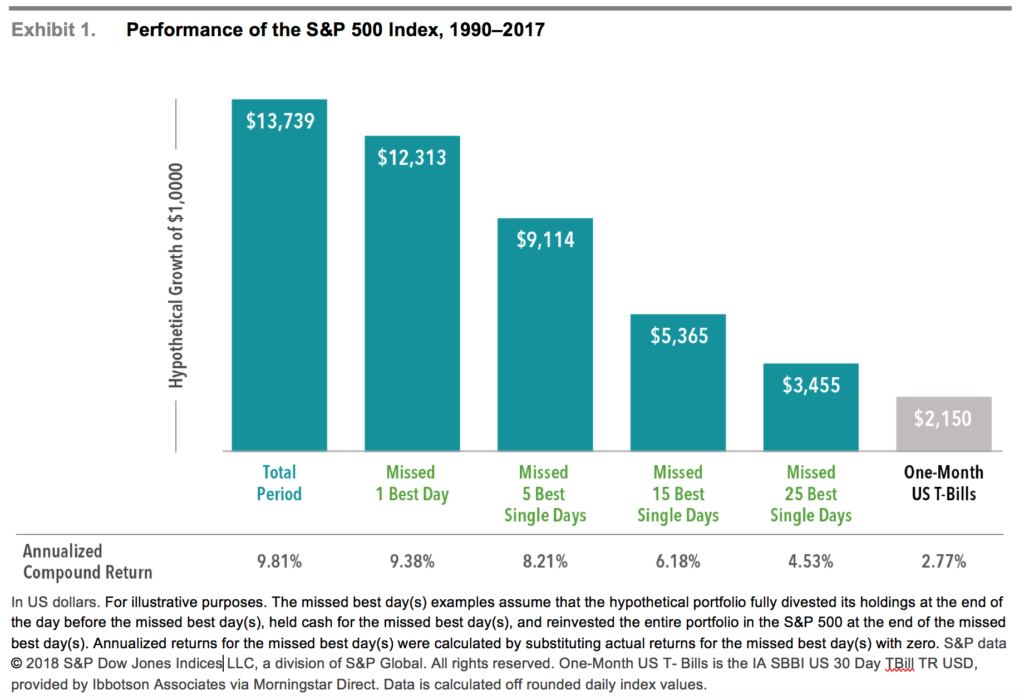 While market volatility can be nerve-racking for investors, reacting emotionally and changing long-term investment strategies in response to short-term declines could prove more harmful than helpful. By adhering to a well-thought-out investment plan, ideally agreed upon in advance of periods of volatility, investors may be better able to remain calm during periods of short-term uncertainty.

Here is a brief list of how to make these market fluctuations work for you instead of against you:

[1]. Frank Russell Company is the source and owner of the trademarks, service marks, and copyrights related to the Russell Indexes.