Sometimes the Best Reaction Is No Reaction at All

The drawing above by our friend Carl Richards depicts the all too common roller coaster braved by many investors. There is humor in the drawing, but it pinpoints an all-too-real fact about investors; they tend to buy when markets feel safe and are expensive, and they sell when they become fearful and the market is cheapest, i.e. most valuable. In other words, they repeatedly break the golden rule of investing; buy low, sell high.

We saw this pattern play out in the crash to 2000 and again in 2008-2009, and we saw it again at the start of February when market volatility reared its ugly head again. See the video below to watch Carl explain how this destructive roller coaster played out in the Tech crash of 2000.

So, lets follow what investors did with their money in January and February.  Watch how the drawing above plays out in real time, with real investor money.

January saw record inflows into stocks and mutual funds as investors began to feel left out if they didn’t have their money in the market.

Stock-based mutual funds and ETFs pulled in $58 billion in the past four weeks, the fastest surge ever.

The rush of cash is inspired by a “fear of missing out,” says BAML’s Michael Hartnett.

The market has been on a tear during the period, with the S&P 500 up 4 percent over the span and off to one of its fastest-ever starts to a calendar year.

It wasn’t just mom and pop investors who started to feel the coast was clear, professionals were also feeling very bullish:

Bullishness among professional investors is now at 66.7 percent in the latest Investors Intelligence survey, the highest reading since April 1986.

Bulls last reached this level a year before the infamous Black Monday crash that sent the Dow Jones industrials down nearly 22 percent in a single day.

Being bullish about the future is not a bad thing, not by a long shot.  We are quite optimistic on the markets prospects over the next 20-30 years. The dysfunction is moving money around based on emotion.  To have record inflows, the money had to come from somewhere, which is typically cash or money market funds. So, investors watched the market climb, experienced FOMO (fear of missing out), then poured money into the market. On to February…

On Friday, February 2nd the DOW fell 665.75 points. Followed on Monday by a record point drop of 1,175. Thursday saw another steep decline of 1,032.89 officially putting the market into correction territory (defined by 10+% drop from a previous high).

So, how was investor fortitude?

U.S. stock funds saw a record $23.9 billion withdrawn by investors in the last week, according to Thomson Reuters data

So, the record inflows quickly reversed themselves and became record outflows. Also, what about bullish confidence? As you can see from the Fear and Greed Index, sentiment quickly went from Extreme Greed just one week prior, to Extreme Fear.

“Portfolios are like bars of soap, the more you touch them, the smaller they get.”

Making changes based on emotion causes more damage to investor portfolios than actual corrections do.

Mike Williams shares some great insight into the Fear and Greed Index over time (shared on Tuesday, February 13th, 2018): 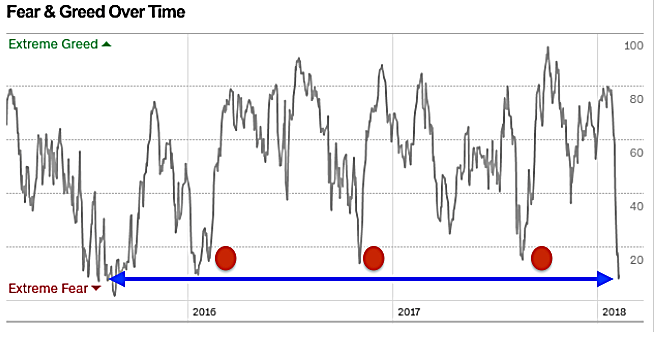 Consider the red dots on the chart above showing the Greed and Fear readings over the last 4 years.  They mark in order:

“The pre-Election Fears of Trump”

Indeed, current levels of fear surpass all of those events.

Further – we are back to the Brexit Global Armageddon lows in late summer 2015!  Remember those?

Now here is what a long-term investor should be asking themselves:

Did ANY of those previous fears prove legit?

Was it wise, looking forward at any of those times, to be a seller of the stock market long-term?

Resist the temptation to react 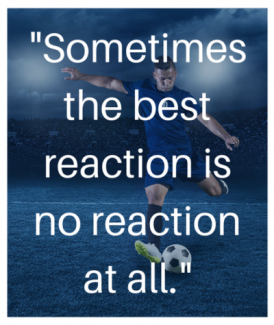 Sometimes, the best reaction is no action at all. Consider this soccer analogy.

During a penalty kick, a soccer goalie must make a split-second decision to stay put in the center of the goal, jump left, or jump right.

Behavioral economist Ofer Azar collected data on more than 300 goalies and discovered that goalies who jumped left stopped just 14.2% of the shots, those who jumped right stopped a mere 12.6%. But goalies who stayed put in the center of the goal were able to prevent goals 33.3% of the time. Amazingly, only 6% of the goalies chose that option.*

Azar interviewed the goalies about their decisions and found that emotions played an important role. The goalies revealed that they felt worse if the goal was made and they were standing still. In fact, taking action, even if it’s certain to lead to failure, was considered better than taking no action at all.

Azar applied his soccer research to the behavior of investors and found that when the markets are in turmoil, we have a powerful urge to “do something” even when that “something” doesn’t make a lot of practical sense. In the 2008 market meltdown, many investors gave in to the instinct to sell because it satisfied their desire for action. But those who stayed put benefited in the long run as the market recovered.

The bottom line: During times of market stress, it can be difficult and even seem counterintuitive to stay put, but that’s often exactly the best decision. Historically, the stock market delivers far more often than not. Working together, we can increase the chances for investment success by resisting the temptation to “jump” to one side or the other when markets erupt in turmoil.

Indices are not available for direct investment. Their performance does not reflect the expenses associated with the management of an actual portfolio. Past performance is not a guarantee of future results. Diversification does not eliminate the risk of market loss.

There is no guarantee investment strategies will be successful. Investing involves risks including possible loss of principal. Investors should talk to their financial advisor prior to making any investment decision. There is always the risk that an investor may lose money. A long-term investment approach cannot guarantee a profit.

All expressions of opinion are subject to change. This article is distributed for informational purposes, and it is not to be construed as an offer, solicitation, recommendation, or endorsement of any particular security, products, or services. Investors should talk to their financial advisor prior to making any investment decision.